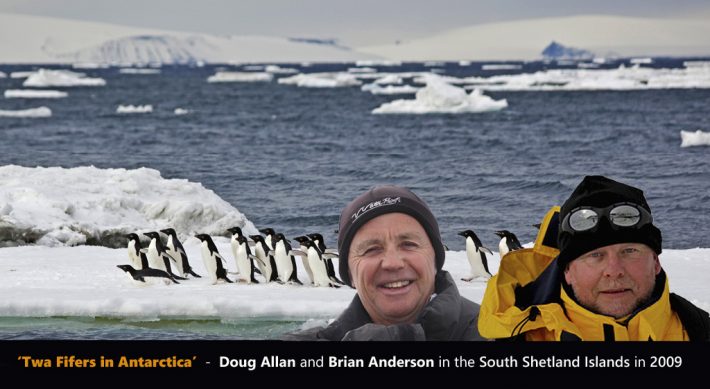 Doug Allan has recently received a Scottish BAFTA Craft Award for his awesome career, filming wildlife around some of the world’s remotest wildernesses. This is the latest award to add to his many previous ones, which include 4 Emmy’s and 5 Baftas. Read the BBC feature and clips about Doug’s career and this latest prize.

I first met Doug in Antarctica in 2009 over a pint of Fuegian beer and a coke (that was Doug’s) in the bar of our Russian icebreaker, the Kapitan Khlebnikov, as it ploughed through the sea ice. After a good chat it turned out that Doug and I had gone to the same primary school in Dunfermline, Fife, in Scotland during the 50s and 60s respectively.

So, meeting a fellow Fifer in Antarctica, but a very talented cameraman & photographer and a nice guy with some great stories to tell.

This is a shot of us both in the Antarctic Peninsula with Adelie penguins in the background. Congratulations Doug on the new award.